Maarten's crew has now joined IMD in scoring a total of 4 wins in the history of the Alumni Business Cup. Whilst this is INSEAD's 8th victory in the ABCup, its last win dates back to 2005 and the INSEAD teams welcomed this evidence that they were not being left behind by IMD and LBS..

Rob Cotterill and Klaus Rassmussen's LBS crew take back the newly created STELTON Sailing Trophy awarded to the winners of the sailing series (same number of points than Maarten, but higher number of wins). The Insiders will remember that STELTON, the famous Danish tableware design company is owned by Michael Ring and that the said trophy is a reference to his IMD team having pocketed a great number (if not the greatest) of sailing wins.

INSEAD/HEC Philippe Lerique's team gets Onshore honors, thanks to their thorough knowledge of wine and art history. However, two impressive wins at sea on Friday with 40+ knots gusts, proved that they were more than educated bar flies! 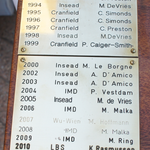 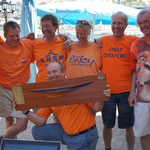 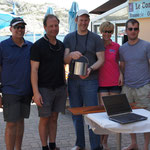